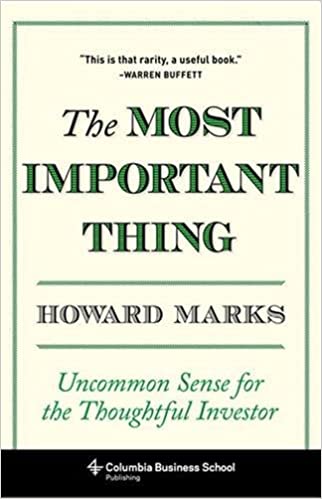 Howard Marks is the co-founder of Oaktree Capital, the world’s biggest distressed debt investor, and for thirty years, he’s shared his thoughts on markets and investing via memos. This book is based off his memos and packages his most important thoughts into one place. It’s superb. If you want to learn about markets and investing, read this then sign up to his memos.

The Most Important Thing

The whole book is excellent. I encourage you to read it all. I only took extensive notes on the first ‘most important thing’ here: second level thinking. From my experience, very few people think in this way but it’s so important because it applies to everything in life, not just investing, and if you want to get ahead, you have to think differently.

Few people have what it takes to be great investors. Some can be taught, but not everyone…and those who can be taught can’t be taught everything. Valid approaches work some of the time but not all. Even the best investors don’t get it right every time.

The reasons are simple. No rule always works. The environment isn’t controllable, and circumstances rarely repeat exactly. Psychology plays a major role in markets, and because it’s highly variable, cause and effect relationships aren’t reliable. Investing, like economics, is more art than science. And that means it can get a little messy.

It’s a matter of what you’re trying to accomplish. Anyone can achieve average investment performance – just invest in an index fund that buys a little of everything. That will give you what’s known as “market returns” – merely matching whatever the market does.

Everyone wants to make money. All of economics is based on belief in the universality of the profit motive. So is capitalism; the profit motive makes people work harder and risk their capital. The pursuit of profit has produced much of the material progress the world has enjoyed.

But that universality also makes beating the market a difficult task. Millions of people are competing for each available dollar of investment gain. Who’ll get it? The person who’s a step ahead. In some pursuits, getting to the front of the pack means more schooling, more time in the gym or library, better nutrition, more perspiration, greater stamina or better equipment. But in investing, where these things count for less, it calls for more perceptive thinking…at what I call the second level.

Remember your goal in investing isn’t to earn average returns; you want to do better than average. Thus, your thinking has to be better than that of others – both more powerful and at a higher level. Since other investors may be smart, well-informed and highly computerized, you must find an edge they don’t have.

In short, being right may be a necessary condition for investment success, but it won’t be sufficient. You must be more right than others…which by definition means your thinking has to be different.

What is second level thinking?

First level thinking is simplistic and superficial, and just about everyone can do it (a bad sign for anything involving an attempt at superiority). All the first level thinker needs is an opinion about the future, as in “The outlook for the company is favourable, meaning the stock will go up.”

First-level thinkers look for simple formulas and easy answers. You’ll run into plenty of people who will try their hardest to make it sound simple. Brokerage firms, for example, want you to think everyone is capable of investing – at $10 per trade. Academics, too, who teach investing. Or well-intentioned practitioners who overestimate the extent to which they’re in control; I think most of them fail to tote up their records, or they overlook their bad years or attribute losses to bad luck. Finally, there are those who simply fail to understand the complexity of the subject.

All investors can’t beat the market since, collectively, they are the market. Before trying to compete in the zero-sum world of investing, you must ask yourself whether you have good reason to expect to be in the top half. To outperform the average investor, you have to be able to outthink the consensus. Are you capable of doing so? What makes you think so?

You can’t do the same things others do and expect to outperform. Unconventionality shouldn’t be a goal in itself, but rather a way of thinking. In order to distinguish yourself from others, it helps to have ideas that are different and to process those ideas differently. I conceptualise the situation as a simple 2-by-2 matrix: