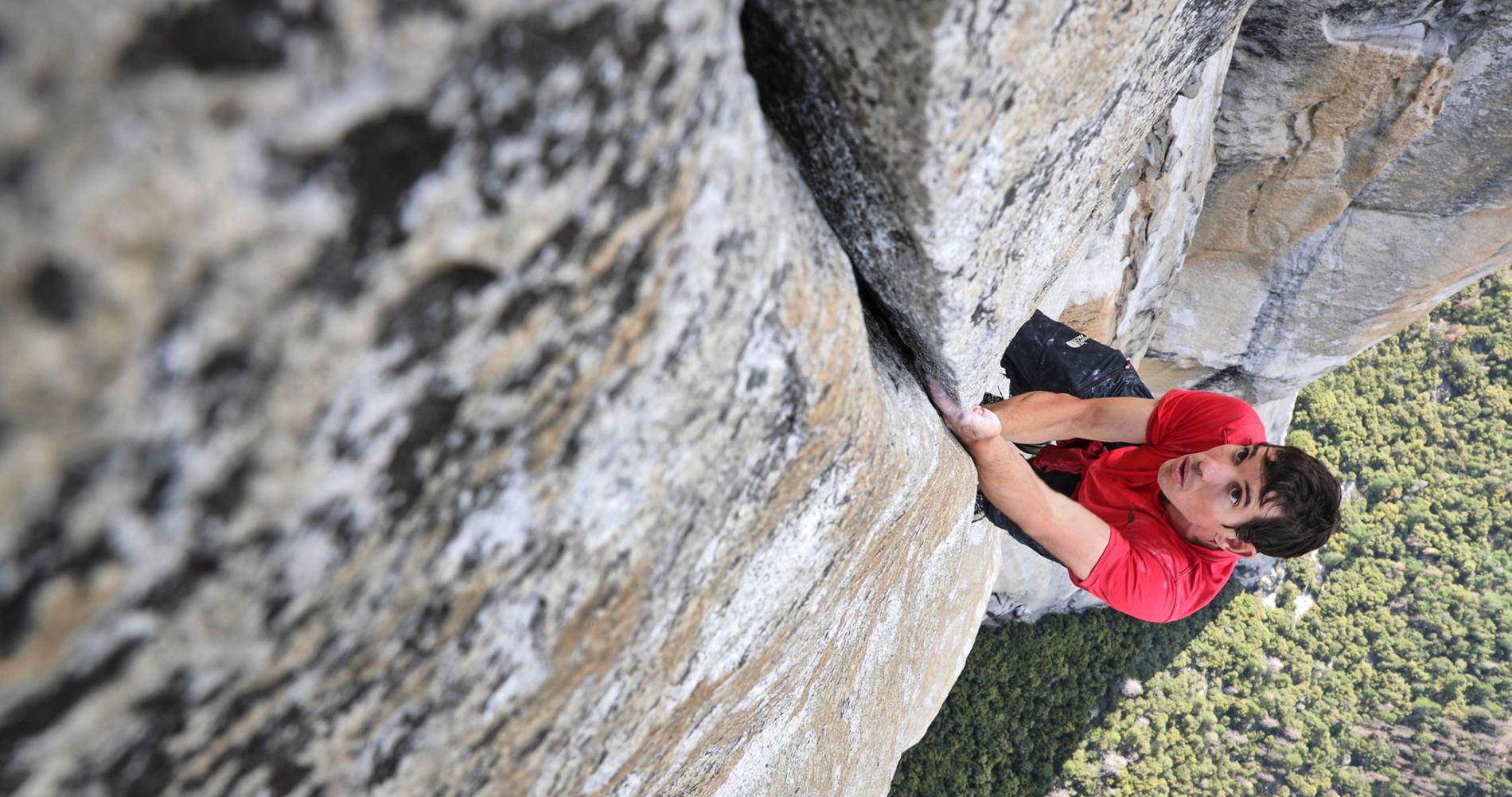 he secret of life is to find places where it’s safe and wise for you to take more risk than anyone else.

The thing that makes El Capitan so intimidating is the sheer scale of the wall. Most climbers take three to five days to ascend its 3,000 feet of vertical granite.

Alex Honnold, early one Saturday in June 2017, climbed it in less than four hours with nothing but shoes and a chalk bag.

No rope. No support. Free solo.

There’s no greater risk but that's not how Alex sees it. Here’s an excerpt from his interview with National Geographic in 2015.

“Do you think what you do is dangerous?
What I do is very high consequence, but I don’t think it’s particularly risky. The odds of me actually falling are very low.

Alex, you’re a thousand feet off the deck clinging to an overhanging crack, with one knuckle between you and oblivion. You do realize that the average person probably wouldn’t think the odds of you eventually slipping are low, right?
‍They don’t understand the preparation and the training, and how far in my comfort zone I am with most of the climbs I’m doing. What I do makes total sense to me and is easily understandable.

What about the risks that you can’t control, like rockfall, breaking a hold, or getting stung by bees?
Those kinds of objective hazards I just set aside as the cost of doing business. Every time you go out on a highway you’re running an astronomically small chance of being hit by a big rig, that’s the cost of getting on the highway. But you don’t think about it every time because a long time ago you just accepted it.”

It’s difficult to square what Alex does with what he says. From a comfortable vantage point, with no comparable experience, it’s hard to believe that climbing free solo isn’t risky.

But that’s his point. We don't have any related experience to draw on so we have to rely on our primal instincts, which are prone to mis-price risks.

He's been climbing for decades. His dedication to do what he enjoys better than anyone means he understands the risks better than everyone.

Tim Urban, a blogger, made a similar point about world-class operators in 2015 when he wrote a 90,000-word epic on the world of Elon Musk and his businesses, having just spent six months with him in California.

He said that we mistake extraordinary people's understanding of risk for courage:

"When Musk put his entire fortune down on SpaceX and Tesla, he was being bold as f***, but courageous? Not the right word. It was a case of taking a bunch of information he had and puzzling together a plan that seemed logical. It’s not that he was sure he’d succeed—in fact, he thought SpaceX in particular had a reasonable probability of failure—it’s just that nowhere in his assessments did he foresee danger."

It’s no different with Alex Honnold. Or Warren Buffett for that matter.

Finance textbooks and online investment services preach one message more than any other. Diversify. Don’t put all your eggs in one basket. Why? Because if you invest in a range of different investments and assets, you can lower the risk of your portfolio without giving up potential returns. Some go so far as to call diversification the only free-lunch in finance.

But Buffett, known as one of the best investors in the world, believes the opposite. A concentrated portfolio is the key to exceptional long-term returns.

“Diversificationis a protection against ignorance. It makes very little sense for those who know what they’re doing. . . .if it’s not your game, participate in total diversification. If it’s your game, diversification doesn’t make sense. It’s crazy to put money in your twentieth choice rather than your first choice. . . . [Berkshire vice-chairman] Charlie and I operated mostly with five positions."

Shunning popular wisdom made him and his clients a lot of money.

From 1964 to 2019, Berkshire Hathaway – his investment company – has grown by 2.7 million percent. In contrast, The S&P 500, a diversified collection of the 500 largest listed US businesses, has grown by 20 thousand percent. Buffett’s concentration beat the market’s diversification by one hundred and thirty-seven times.

Over that time, as he pointed out, Buffett’s five biggest holdings have typically accounted for 60-80% of his investment portfolio. That compares with 10-20% for a typical fund you could buy. And, on at least four occasions, he invested over 15% of Berkshire Hathaway in a single company.

Like Buffett said, for most investors, reducing risk via diversification is the right approach. The textbooks and websites aren’t wrong.

But almost every professional investor is more diversified than Buffett, too. They either won’t or can’t take as much as risk as him because if they make a mistake, they lose their job, along with millions or billions of their clients’ dollars. Which is why, most of the time, it isn’t even an option – their risk managers make sure of that.

This lesson repeats itself time and again. Success isn't about reducing risk. It's about pushing your ability to a frontier where you end up comfortable with risks others won't take. Look into any world-class operator, no matter what field, and you’ll stumble onto risks they take that 99.9% of people can't stomach.

Charlie Munger, Warren Buffett's business partner, sums up the challenge like this.

"The whole secret of investment is to find places where it’s safe and wise to non-diversify. It’s just that simple.”

It’s not just the secret of investment. It’s the secret of life. Find places where it’s safe and wise for you to take more risk than anyone else.

Because when you find an area where the perceived risk of doing something is higher than the actual risk of you doing it, you give yourself an unfair advantage. You’re playing on a level most people won’t or can’t play on. And when you understand risk best, you stay in the game longest.

When you stay in the game longest, you end up victorious.

How you do that is simpler than you might think. People assume risk taking is genetic. You’re either crazy or you’re not and luck decides who survives. But, while luck undoubtedly plays its part, the ability to take risks isn’t handed down by the genetic lottery. It’s earnt by practice.

Alex Honnold likens his comfort zone to a bubble he’s cultivated since he started climbing. Each training session would push his bubble in different directions, stretching what he was comfortable with, little by little – over a long period of time – until objectives that seemed crazy to begin with, were only a handhold away.

Look at how he approached his free solo of El Cap.

Decades of preparation for hours of execution

Alex dreamed of climbing El Cap without a rope for a decade before doing it. Every year he would drive into Yosemite, look up at the wall, and walk away. Too risky. He wasn’t ready.

3,000 feet of climbing involves thousands of hand pulls and foot pushes. He didn’t feel comfortable until he knew each movement by memory.

Most of them he learnt through repetition. Over the decade he spent dreaming of this project, he climbed the wall some fifty times with a rope. Those climbs helped but they weren’t enough.

His preferred training sessions involved hiking to the top of El Cap and rappelling down. He would take over a thousand feet of rope and spend the day rehearsing moves. Once he found sequences that felt secure and repeatable, he memorised them. In his words,

"I had to make sure that they were so deeply ingrained within me that there was no possibility of error. I didn't want to be wondering if I was going the right way or using the best holds. I needed everything to feel automatic."

That continued into the evenings. For a year before his climb, he went through a stretching routine so he knew, come the moment, he would be supple enough to execute the hardest move of the climb; a karate kick 2,000 feet up on the most difficult part of the route, the Boulder Problem.

Everything that could be controlled, needed to be handled. As his climb drew closer, Alex enlisted the help of his friend, another world class climber, to clear a crack of loose rocks halfway up the route. As he put it,

“It’s never that easy to carry a pack full of rocks around. It’s even harder on the side of a cliff. It may have felt silly, but it still had to get done. I needed everything to feel perfect if I was ever going to climb the route without a rope. After two seasons of working specifically toward a potential free solo of El Cap, I finally finished all my preparations. I knew every handhold and foothold on the whole route, and I knew exactly what to do.”

Risk tends to be reward’s afterthought. But they are two ends of the same leash. You can’t be successful without doing something you’re afraid of and the more success you want, the more perilous the journey becomes.

So don’t shy away from what you’re afraid of. Aim to take bigger risks but work tirelessly to understand them better than anyone. Then you can do what you enjoy better than everyone.