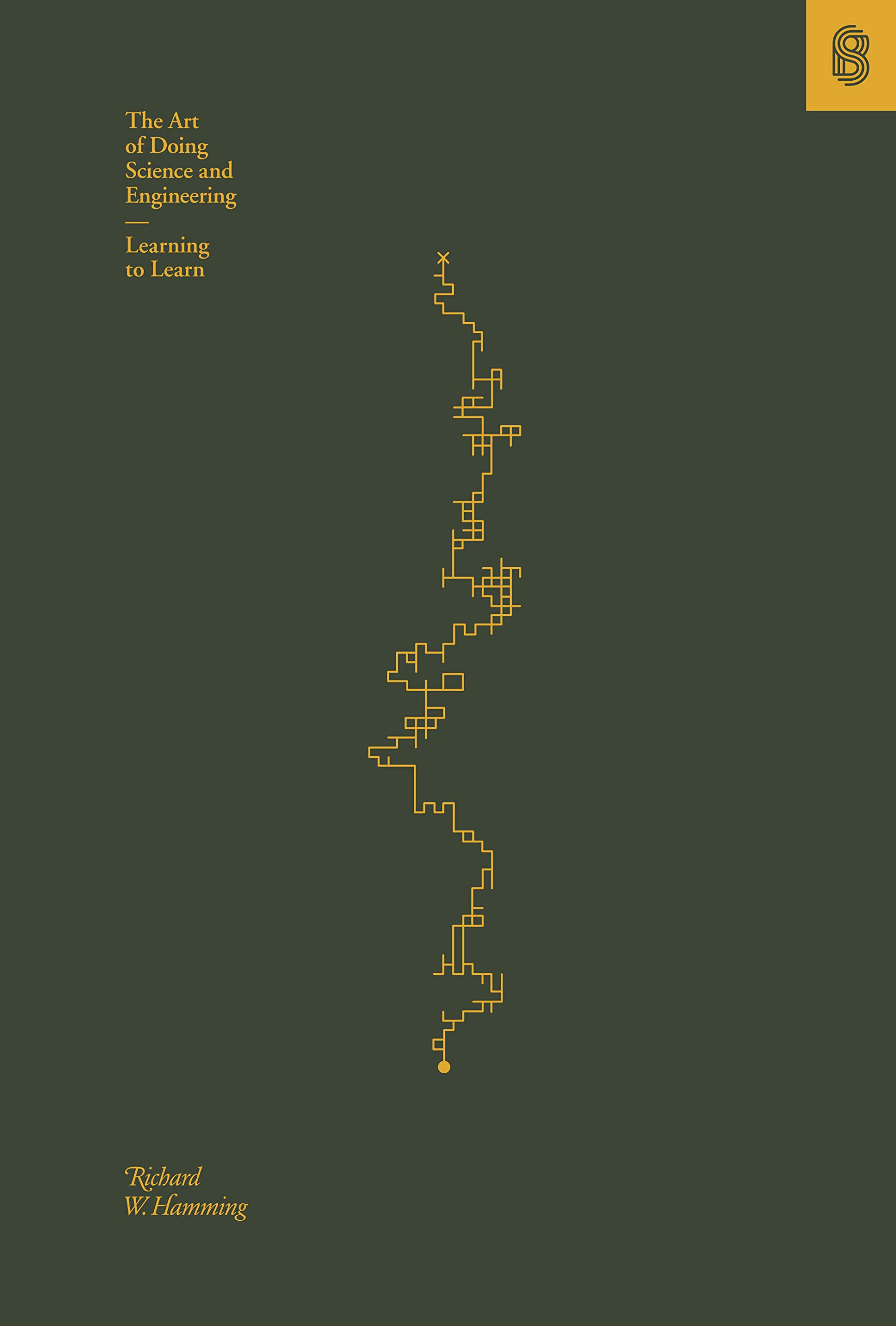 Richard Hamming was an award-winning computer scientist and teacher. Learning to Learn is adapted from a course he taught at the US Naval Postgraduate School. It gets technical in places but overall it will convince you to find important problems, be unapologetically ambitious, and keep going until you succeed.

In a sense this is a religious course: I am preaching the message that, with apparently only one life to live on this earth, you ought to try to make significant contributions to humanity rather than just get along through life comfortably — that the life of trying to achieve excellence in some area is in itself a worthy goal for your life.

Why do I believe this book is important?

It is important because as far as I know each of you has but one life to lead, and it seems to me it is better to do significant things than to just get along through life to its end.

Thus in a real sense I am preaching the messages that:

Newton observed that if others would think as hard as he did, then they would be able to do the same things. Edison said genius was 99% perspiration and 1% inspiration.

It is hard work, applied for long years, which leads to the creative act, and it is rarely just handed to you without any serious effort on your part. Yes, sometimes it just happens, and then it is pure luck. It seems to me to be folly for you to depend solely on luck for the outcome of this one life you have to lead.

One of the characteristics you see is that great people when young were generally active—though Newton did not seem exceptional until well into his undergraduate days at Cambridge, Einstein was not a great student, and many other great people were not at the top of their class.

Ability comes in many forms, and on the surface the variety is great; below the surface there are many common elements. Having disposed of the psychological objections of luck and the lack of high-IQ-type brains, let us go on to how to do great things.

How to do great things

Yet direct observation and direct questioning of people show most scientists spend most of their time working on things they believe are not important and are not likely to lead to important things.

Courage, or confidence, is a property to develop in yourself. Look at your successes, and pay less attention to failures than you are usually advised to do in the expression, “Learn from your mistakes.”

While playing chess Shannon would often advance his queen boldly into the fray and say, “I ain’t scared of nothing.” I learned to repeat it to myself when stuck, and at times it has enabled me to go on to a success. I deliberately copied a part of the style of a great scientist.

The courage to continue is essential, since great research often has long periods with no success and many discouragements.

The desire for excellence is an essential feature for doing great work. Without such a goal you will tend to wander like a drunken sailor.

The sailor takes one step in one direction and the next in some independent direction. As a result the steps tend to cancel each other out, and the expected distance from the starting point is proportional to the square root of the number of steps taken.

With a vision of excellence, and with the goal of doing significant work, there is a tendency for the steps to go in the same direction and thus go a distance proportional to the number of steps taken, which in a lifetime is a large number indeed.

Most famous people, sooner or later, tend to think they can only work on important problems—hence they fail to plant the little acorns which grow into the mighty oak trees. I have seen it many times, from Brattain of transistor fame and a Nobel Prize to Shannon and his information theory. Not that you should merely work on random things, but on small things which seem to you to have the possibility of future growth.

Thus what you consider to be good working conditions may not be good for you! There are many illustrations of this point.

For example, working with one’s door closed lets you get more work done per year than if you had an open door, but I have observed repeatedly that later those with the closed doors, while working just as hard as others, seem to work on slightly the wrong problems, while those who have let their door stay open get less work done but tend to work on the right problems!

When stuck, often inverting the problem and realizing the new formulation is better represents a significant step forward. I am not asserting all blockages can be so rearranged, but I am asserting that many more than you might at first suspect can be so changed from a more or less routine response to a great one.

All these stories show that the conditions you tend to want are seldom the best ones for you—the interaction with harsh reality tends to push you into significant discoveries which otherwise you would never have thought about while doing pure research in a vacuum of your private interests.

Now to the matter of drive. Looking around, you can easily observe that great people have a great deal of drive to do things.

I had worked with John Tukey for some years before I found he was essentially my age, so I went to our mutual boss and asked him, “How can anyone my age know as much as John Tukey does?” He leaned back, grinned, and said, “You would be surprised how much you would know if you had worked as hard as he has for as many years.” There was nothing for me to do but slink out of his office, which I did. I thought about the remark for some weeks and decided that while I could never work as hard as John did, I could do a lot better than I had been doing.

The steady application of a bit more effort has a great total accumulation. But be careful—the race is not to the one who works hardest! You need to work on the right problem at the right time and in the right way—what I have been calling “style.”

At the urging of others, for some years I set aside Friday afternoons for “great thoughts.” Of course, I would answer the telephone, sign a letter, and such trivia, but essentially, once lunch started, I would only think great thoughts—what was the nature of computing, how would it affect the development of science, what was the natural role of computers in Bell Telephone Laboratories, what effect will computers have on AT&T, on science generally? I found it was well worth the 10% of my time to do this careful examination of where computing was heading so I would know where we were going and hence could go in the right direction.

I strongly recommend taking the time, on a regular basis, to ask the larger questions, and not stay immersed in the sea of detail where almost everyone stays almost all of the time.

These chapters have regularly stressed the bigger picture, and if you are to be a leader into the future, rather than a follower of others, I am now saying it seems to me to be necessary for you to look at the bigger picture on a regular, frequent basis for many years.

There is another trait of great people I must talk about—and it took me a long time to realize it. Great people can tolerate ambiguity; they can both believe and disbelieve at the same time. You must be able to believe your organization and field of research is the best there is, but also that there is much room for improvement!

Doing the job with “style” is important. As the old song says, “It ain’t what you do, it’s the way that you do it.” Look over what you have done, and recast it in a proper form. I do not mean give it false importance, nor propagandize for it, nor pretend it is not what it is, but I do say that by presenting it in its basic, fundamental form, it may have a larger range of application than was first thought possible.

All three are essential—you must learn to sell your ideas, not by propaganda, but by force of clear presentation. I am sorry to have to point this out; many scientists and others think good ideas will win out automatically and need not be carefully presented.

They are wrong; many a good idea has had to be rediscovered because it was not well presented the first time, years before! New ideas are automatically resisted by the establishment, and to some extent justly.

The organization cannot be in a continual state of ferment and change, but it should respond to significant changes. Change does not mean progress, but progress requires change. To master the presentation of ideas, while books on the topic may be partly useful, I strongly suggest you adopt the habit of privately critiquing all presentations you attend and also asking the opinions of others.

You are likely to be saying to yourself you have not the freedom to work on what you believe you should when you want to. I did not either for many years—I had to establish the reputation on my own time that I could do important work, and only then was I given the time to do it.

You do not hire a plumber to learn plumbing while trying to fix your trouble; you expect he is already an expert. Similarly, only when you have developed your abilities will you generally get the freedom to practice your expertise, whatever you choose to make it, including the expertise of “universality,” as I did.

I have already discussed the gentle art of educating your bosses, so I will not go into it again. It is part of the job of those who are going to rise to the top. Along the way you will generally have superiors who are less able than you are, so do not complain, since how else could it be if you are going to end up at the top and they are not?

Finally, I must address the topic of whether the effort required for excellence worth it. I believe it is—the chief gain is in the effort to change yourself, in the struggle with yourself, and it is less in the winning than you might expect. Yes, it is nice to end up where you wanted to be, but the person you are when you get there is far more important.