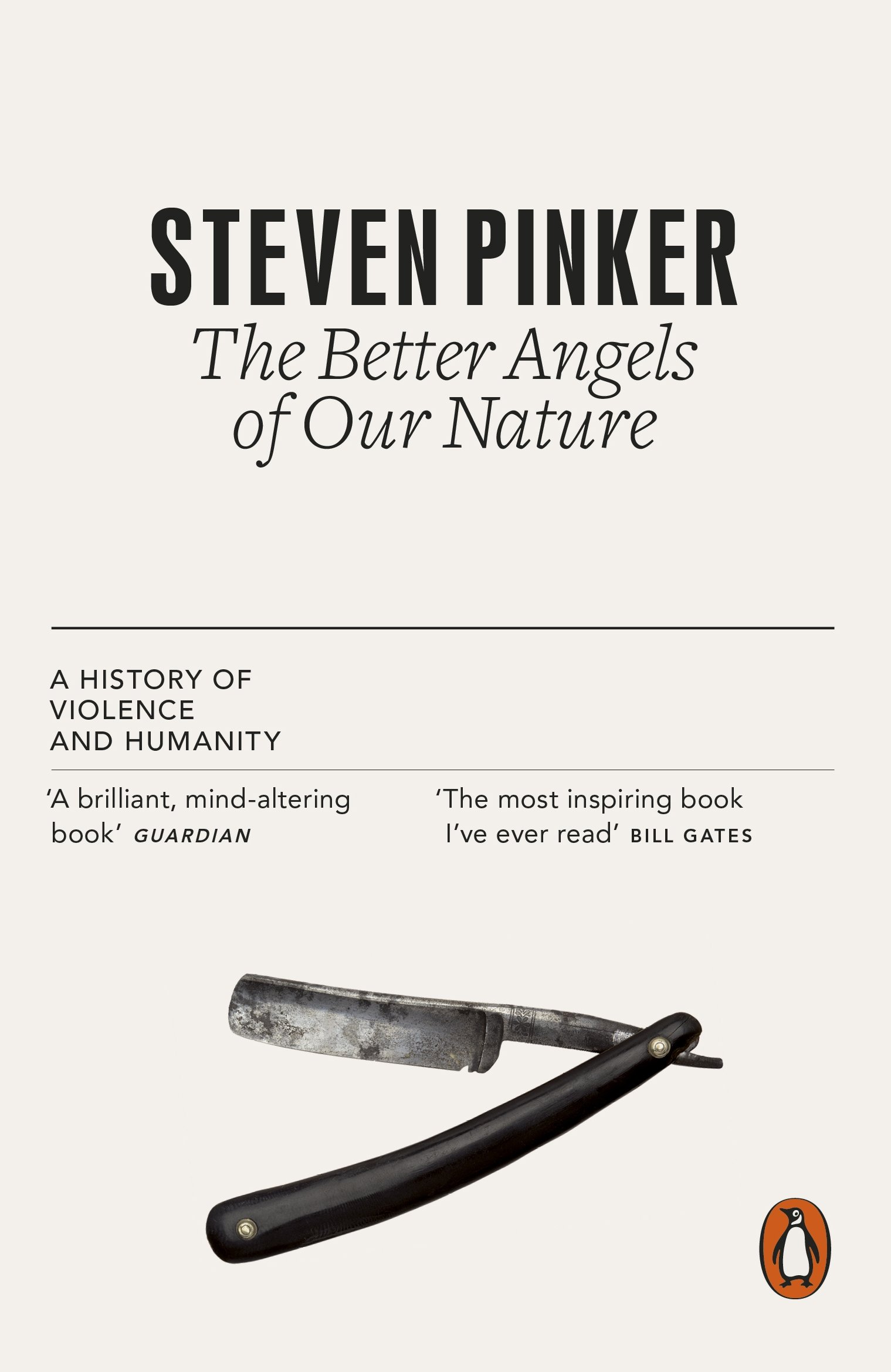 We are lucky to be alive today. The world is unambiguously better than ever. This book shows why, and it’s so well written. It’s not a short story but I promise it’s worth your time. You’ll learn so much, and not just about violence; biology, psychology, history, philosophy, politics and economics as well.

Better Angels of our Nature

The importance of literacy, books, reading and ideas

One technology that did show a precocious increase in productivity before the Industrial Revolution was book production. Before Gutenberg’s invention of the printing press in 1452, every copy of a book had to be written out by hand. Not only was the process time-consuming—it took thirty-seven person-days to produce the equivalent of a 250-page book—but it was inefficient in materials and energy. Handwriting is harder to read than type is, and so handwritten books had to be larger, using up more paper and making the book more expensive to bind, store, and ship. In the two centuries after Gutenberg, publishing became a high-tech venture, and productivity in printing and paper making grew more than twentyfold, faster than the growth rate of the entire British economy during the Industrial Revolution.

With more numerous and cheaper books available, people had a greater incentive to read. It’s not easy to estimate the level of literacy in periods before the advent of universal schooling and standardized testing, but historians have used clever proxy measures such as the proportion of people who could sign their marriage registers or court declarations, which suggest that during the 17th century in England, rates of literacy doubled, and that by the end of the century a majority of Englishmen had learned to read and write.

Not only were more people reading, but they were reading in different ways, a development the historian Rolf Engelsing has called the Reading Revolution. People began to read secular rather than just religious material, to read to themselves instead of in groups, and to read a wide range of topical media, such as pamphlets and periodicals, rather than rereading a few canonical texts like almanacs, devotional works, and the Bible.

The growth of writing and literacy strikes me as the best candidate for an exogenous change that helped set off the Humanitarian Revolution. The pokey little world of village and clan, accessible through the five senses and informed by a single content provider, the church, gave way to a phantasmagoria of people, places, cultures, and ideas. And for several reasons, the expansion of people’s minds could have added a dose of humanitarianism to their emotions and their beliefs.

Reading is a technology for perspective-taking. When someone else’s thoughts are in your head, you are observing the world from that person’s vantage point. Not only are you taking in sights and sounds that you could not experience firsthand, but you have stepped inside that person’s mind and are temporarily sharing his or her attitudes and reactions.

Any 21st-century reader who dips into intellectual history can’t help but be impressed by the blogosphere of the 18th. No sooner did a book appear than it would sell out, get reprinted, get translated into half a dozen languages, and spawn a flurry of commentary in pamphlets, correspondence, and additional books. Thinkers like Locke and Newton exchanged tens of thousands of letters; Voltaire alone wrote more than eighteen thousand, which now fill fifteen volumes. Of course this colloquy unfolded on a scale that by today’s standards was glacial—weeks, sometimes even months—but it was rapid enough that ideas could be broached, criticized, amalgamated, refined, and brought to the attention of people in power. A signature example is Beccaria’s On Crimes and Punishments, which became an instant sensation and the impetus for the abolition of cruel punishments throughout Europe.

Given enough time and purveyors, a marketplace of ideas can not only disseminate ideas but change their composition. No one is smart enough to figure out anything worthwhile from scratch. As Newton (hardly a humble man) conceded in a 1675 letter to fellow scientist Robert Hooke, “If I have seen further it is by standing on the shoulders of giants.” The human mind is adept at packaging a complicated idea into a chunk, combining it with other ideas into a more complex assembly, packaging that assembly into a still bigger contrivance, combining it with still other ideas, and so on. But to do so it needs a steady supply of plug-ins and subassemblies, which can come only from a network of other minds.

Airplanes can bring people together, but people who live in a city are already together, so cities have long been crucibles of ideas. Cosmopolitan cities can bring together a critical mass of diverse minds, and their nooks and crannies can offer places for mavericks to seek refuge. The Age of Reason and the Enlightenment were also an age of urbanization. London, Paris, and Amsterdam became intellectual bazaars, and thinkers congregated in their salons, coffeehouses, and bookstores to hash out the ideas of the day.

The universe of ideas, in which one idea entails others, is itself an exogenous force, and once a community of thinkers enters that universe, they will be forced in certain directions regardless of their material surroundings. I think this process of moral discovery was a significant cause of the Humanitarian Revolution.

Successful innovators not only stand on the shoulders of giants; they engage in massive intellectual property theft, skimming ideas from a vast watershed of tributaries flowing their way.

The civilizations of Europe and western Asia conquered the world because their migration and shipping routes allowed traders and conquerors to leave behind inventions that had originated anywhere in the vast Eurasian landmass: cereal crops and alphabetic writing from the Middle East, gunpowder and paper from China, domesticated horses from Ukraine, oceangoing navigation from Portugal, and much else.

What’s true of technological progress may also be true of moral progress. Individuals or civilizations that are situated in a vast informational catchment area can compile a moral know-how that is more sustainable and expandable than even the most righteous prophet could devise in isolation.

Let me illustrate this point with a potted history of the Rights Revolutions.

In his 1958 essay “Pilgrimage to Nonviolence,” Martin Luther King recounted the intellectual threads that he wove into his political philosophy.

As a graduate student in theology in the late 1940s and early 1950s, he was, of course, conversant with the Bible and orthodox theology. But he also read renegade theologians such as Walter Rauschenbusch, who criticized the historical accuracy of the Bible and the dogma that Jesus died for people’s sins.

King then embarked on “a serious study of the social and ethical theories of the great philosophers, from Plato and Aristotle down to Rousseau, Hobbes, Bentham, Mill, and Locke. All of these masters stimulated my thinking–such as it was—and, while finding things to question in each of them, I nevertheless learned a great deal from their study.”

King’s thinking was irrevocably changed one day when he traveled to Philadelphia to hear a lecture by Mordecai Johnson, the president of Howard University. Johnson had recently returned from a trip to India and spoke about Mohandas Gandhi, whose influence had recently culminated in national independence. “His message was so profound and electrifying,” King wrote, “that I left the meeting and bought a half-a-dozen books on Gandhi’s life and works.”

King’s historic speech to the March on Washington in 1963 was an ingenious recombination of the intellectual components he had collected during his peripatetic pilgrimage: imagery and language from the Hebrew prophets, the valorization of suffering from Christianity, the ideal of individual rights from the European Enlightenment, cadences and rhetorical tropes from the African American church, and a strategic plan from an Indian who had been steeped in Jain, Hindu, and British culture.

One of Martin Luther King’s most famous quotations was adapted from an 1852 essay by the abolitionist Unitarian minister Theodore Parker: I do not pretend to understand the moral universe; the arc is a long one, my eye reaches but little ways; I cannot calculate the curve and complete the figure by the experience of sight; I can divine it by conscience. And from what I see I am sure it bends towards justice.

It’s hard to find any correlation over history between the destructive power of weaponry and the human toll of deadly quarrels.

Over the millennia weapons, just like every technology, got better and better, yet rates of violence have not gone steadily up but rather have lurched up and down the slope of an inclined sawtooth.

The spears and arrows of pre-state peoples notched up higher proportional body counts than has anything since, and the pikemen and cavalry of the Thirty Years’ War did more human damage than the artillery and gas of World War I.

Though the 16th and 17th centuries saw a military revolution, it was less an arms race than an armies race, in which governments beefed up the size and efficiency of their armed forces. The history of genocide shows that people can be slaughtered as efficiently with primitive weapons as they can with industrial technology

The failure of technological determinism as a theory of the history of violence should not be that surprising.

Human behavior is goal-directed, not stimulus-driven, and what matters most to the incidence of violence is whether one person wants another one dead. The cliché of gun control opponents is literally true: guns don’t kill people; people kill people (which is not to endorse the arguments for or against gun control).

Anyone who is equipped to hunt, harvest crops, chop firewood, or prepare salad has the means to damage a lot of human flesh. With necessity being the mother of invention, people can upgrade their technology to the extent their enemies force them to.

Weaponry, in other words, appears to be largely endogenous to the historical dynamics that result in large declines in violence.

While contests over resources are a vital dynamic in history, they offer little insight into grand trends in violence. The most destructive eruptions of the past half millennium were fueled not by resources but by ideologies, such as religion, revolution, nationalism, fascism, and communism.

The looseness of the connection between resource control and violence should also come as no surprise.

Evolutionary psychologists tell us that no matter how rich or poor men are, they can always fight over women, status, and dominance.

Economists tell us that wealth originates not from land with stuff in it but from the mobilization of ingenuity, effort, and cooperation to turn that stuff into usable products. When people divide the labor and exchange its fruits, wealth can grow and everyone wins. That means that resource competition is not a constant of nature but is endogenous to the web of societal forces that includes violence.

Depending on their infrastructure and mindset, people in different times and places can choose to engage in positive-sum exchanges of finished products or in zero-sum contests over raw materials.

The six trends that make up our species’ retreat from violence