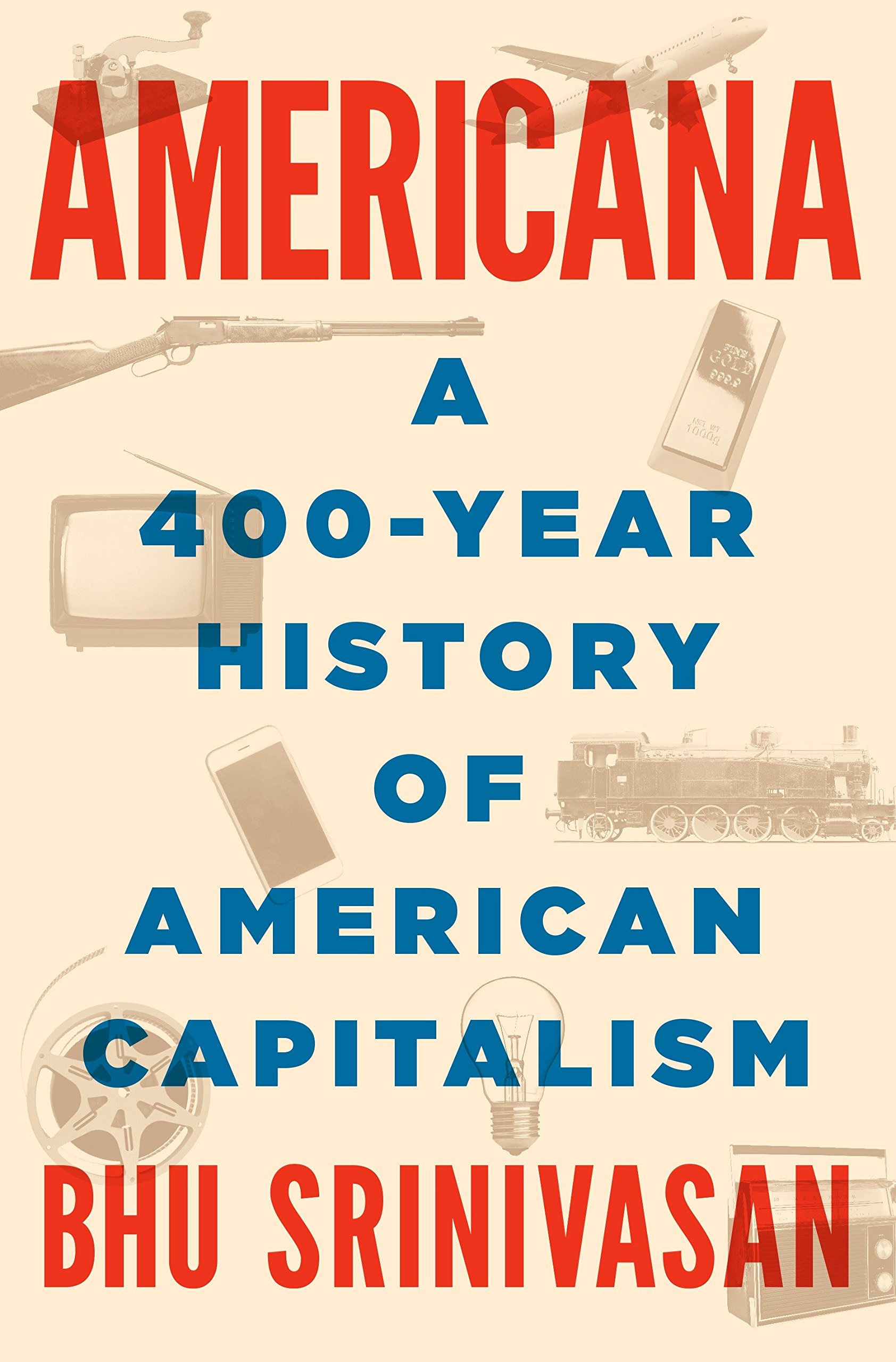 Each chapter tells the story of an industry or invention that weaved the fabric of American progress. Srinivasan puts you alongside the 102 pilgrims as they voyaged on board the Mayflower to the New World in 1620 and from there he takes you on a tour through the people and moments that lifted America from a divided, low-tech, cheap exporter to the most influential country in the world. Brilliant.

Before political systems, economic theories, businessmen, capital, and labour enter the picture to magnify effects of some next big thing, science is generally crucial to the moment of inception, with subsequent breakthroughs and feats of engineering becoming the building blocks of material progress.

Some inventor, somewhere, has often paid the price of seemingly endless frustration, dispiriting self-doubt, and years of thankless toil. And this frustration is usually laid upon the foundation of centuries of other men’s fruitless trials and errors. Such men usually die before their work crystallises into any practical application.

But when such a miracle actually comes together as some dreamer designed it, the attainment of such elusive glory for one keeps another generation of tinkerers and thinkers hopeful and hopeless at the same time. Such is the nature of research and development. American capitalism’s redeeming quality was, and is, that when those rare epiphanies prove to work, the system deploys to bring them to the people faster than any other.

In England the railroad was developed to serve industry, mainly to bring coal, the industrial revolution’s fuel source, to textile mills. In preindustrial America, an agrarian nation with fast farmland that had just been unlocked by the system of canals, the railroad’s effect was far more pronounced. Here the railway was the catalyst for industrial capitalism, where the system of transportation itself became the nation’s first great industry.

Though the benefits of locomotives were obvious, speed being the first, the development of the American railroad system took time. By 1837 the total mileage of railroad track had grown to less than 1500 miles: at $20,000 per mile, the construction of tracks alone had cost $30 million seemingly significant, but a fraction of the investment of canals.

Track construction accelerated right after the panic of 1837, the deep recession of the era, while other sectors felt lingering effects for far longer. The scarcity of capital in the markets caused the final death of canal financing, diverting it to its more efficient replacement, with the slowdown serving as the metaphorical step backward making two steps of progress possible.

Rail roads became the arteries of American capitalism, the circulation system of its commerce, even information can only travel as fast as its messenger, which now invariably was a train. Yet the railways development makes clear that even early American Capitalism was never the same as laissez-faire capitalism. Various forms and forces of government were instrumental to its development, its trajectory, and its eventual implications.

In all, the next big things of the early 19th century: enabling man to travel through and over nature in new ways, with steam boats, canals, and rail roads began as intricate public–private partnerships. The government activities of setting in place the infrastructure, reconciling federal and state laws, committing limited liability, and defining and balancing the conflicts of property rights, evolved into the operating system of its economy, upon which was placed the dynamic layer of free market creativity in the vibrant applications of entrepreneurial activity.

The paradox of gold

California, despite its natural beauty and temperate climate, had remained largely uncontested by European powers.

When Mexico claimed independence they took California with it. But soon Mexico & America were at war over their territories and the boundary between their countries. In 1848, America was declared victorious and everything to the west, including all of California, became a part of the US.

At almost the exact time of the Mexican surrender, gold was discovered in a remote riverbed in Northern California. The riverbeds around both the American river and the Sacramento river contained one of the largest gold deposits discovered in human history.

After the initial rush, there was more money to be made from selling to gold miners than from mining gold itself – the picks and shovels industry. Within the first couple of years of the gold rush, the scale of mining operations had entirely changed. All of the easy gold had been picked off all the riverbeds and hill surfaces. Thus the men who came in the aftermath of the immediate wave, deterred by the capital costs of new mining operations, simply came to set up a supporting trade – these men never had any intention of digging for gold. Once they arrived in San Francisco, they found a fast growing town with every trade thriving. These arrivals added to the thousands of Chinese immigrants who had made San Francisco home. The Bavarian immigrant Levi Strauss, a general goods merchant, arrived to set up his store in this climate, eventually creating the blue jeans that went on to become an enduring symbol of Americana.

The allure of gold was only the beginning. For the next century and a half and counting, American movement westward would become a metaphor for progress, symbolising both ambitious restlessness and internal mobility – a dynamic search for greener pastures.

There was a certain paradox in this sudden release and movement of human energy – from continents away, no less – all to dig in the dirt for a shiny metal that, once dug out successfully, was melted into neat rectangular bars and made its way back into darkness, in bank vaults, never again to see the light of day.

The impact of television on society and sport

By the time WWII ended, every component of television technology had progressed significantly with wartime research and development, but the industry was as nascent as it had been before the war. Within two short years, there was little that was experimental about television or its possibilities for the civilian market. The regulatory structure, due to radio, was already in place for the nation’s airwaves. The large broadcasters had a business model that worked well in radio: a national network underwriting expensive programming and local affiliates augmenting it with lower-cost, local programming. All of the messiness that typically accompanied the birth of new markets didn’t apply. Starting in 1947, television entered America with the anticipation of a future that had once been put on hold. Advertising revenue surpassed those of radio in less than nine years.

By the end of the Eisenhower presidency, television had become inseparable from national politics and presidential campaigns. The average American household had owned a television set for less than ten years when, in 1960, Massachusetts senator John F. Kennedy and Vice President Nixon faced off in the first ever televised presidential debate.

Television also swung the balance of power in sport. Pro football’s growth would have seemed improbable in 1950. Dating back decades, the professional version had always been a nonfactor compared with the collegiate variety. College football’s appeal didn’t translate to the pro game. Unless subsidized by the traditions of a college or university, it was a poor business. This was partly due to the structure of the sport, where the required preparation and on-field violence limited each team’s output to one game per week. With half of any team’s games played on the road, this effectively meant half a dozen games where it could collect ticket revenues. In contrast, professional baseball gave each team 77 home games in the era’s 154-game season. The economics of attendance alone were not enough to make pro football a profitable business. But football’s schedule of weekly games fit the episodic cadence of the television week perfectly. And its limited number of games heightened the importance of each one.

The (re)birth of Silicon Valley

The moon race: while both the Soviet and American programmes were financed by the state, the American programme relied on contracts with private suppliers for the vast variety of components, services, and technologies. These contracts, in every sense, subsidized research and development on a scale that no profit seeking company would have engaged in without the firm revenues of a government contract, which, fairly or unfairly, allowed private entities to retain and benefit from the knowledge gained through the public dollar. So while the initial effort was centrally planned, the residual and serendipitous effects were left to the free market to discover. Communism did not allow this vital second step of allowing fortuitous, profitable accidents to take place.

No place was this more evident than in the business of semiconductors. The use of silicon-based semiconductors, at the most fundamental level, allowed for easier, faster, and more reliable manipulation of electricity, which is central to the execution of all computing processes. In the fifties and sixties, given the nature of their missions, the customers that needed the most reliable, costliest semiconductors – the early adopters – were the air force and, later, NASA.

In the late 1950s, a group of eight engineers working for William Shockley at Shockley Semiconductor looked to leave their mercurial, brilliant boss. They went on to create Fairchild Semiconductor and when Fairchild exercised his option to buy all of the company, two of the original eight (in 1968) looked to start another company. They raised money for their company “integrated electronics”, or Intel. Intel’s business plan was to build the multiple functions of electronic circuitry within a single processing unit, with the goal of continually expanding its power and reducing its size. While Intel is best known for its microprocessor, an equally enduring and impactful aspect of Intel was on the financial side.

The success of Intel’s IPO, which proved that the time frame from start-up to IPO could be compressed to three years, gave rise to a new formalised vehicle dedicated to investing in multiple start-ups: the venture capital fund. This brave new world of high-risk start-up investing started attracting the families of old industrial wealth, university endowments, and pension funds who previously could not access private companies. At the same time, many of the pioneering venture capitalists were not moneymen but graduates of the semiconductor industry. One of the eight men who had formed Fairchild Semiconductor, Eugene Kleiner, would found the venture firm Kleiner Perkins in 1972. In the same year, Don Valentine, a former Fairchild sales executive, founded Sequoia Capital.

This birth of venture capital – a rebirth, really – was a return to the most American of roots, older than its founders’ democracy. The organisers of the Virginia Company had called upon “adventurers” to risk capital. A few years later, the Merchant Adventurers in London coffee houses had agreed to finance the voyage of a large molasses ship known as the Mayflower. 350 years later, an improved concept of venture capital was being applied to the next era of American discovery.